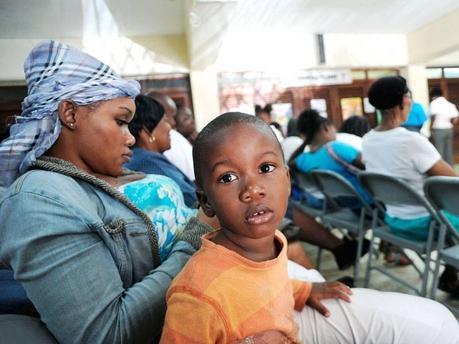 Tyrique Brown waits patiently with his mother, Sabrina McCarthy, at the free dental clinic at the East Queen Street Baptist Church-organised by the Missions For Health in partnership with Nova Southeastern University yesterday. – Ricardo Makyn/Staff Photographer

The president of Missions For Health flashes a toothy grin of his own as he said it, as eager patients queued for the organisation’s second annual dental clinic at the East Queen Street Baptist Church, downtown Kingston, on Monday. Missions is partnering with Nova Southeastern University for the second year to tend to the dental needs of the church members and wider community.

Missions For Health is a part of the ministry of the Pioneer Community Church in Ft Lauderdale, Florida. Grant, a founding pastor of the nine-year-old place of worship, said 90 per cent of the church’s population had Jamaican roots. Plus, many of the congregants are nurses and doctors.

“So I said, ‘How can I harness the resources of these folks to give back?’,” he said.

About four years ago, he met Dr Paula Worts of Nova, and shared his vision. Dr Worts informed him the university had been coming to Jamaica for years.

“So she said, ‘You can come along’,” he said. “… we are like a subset of the Nova team. We’ll work with them and grow with them and when we get big enough, we can branch off on our own.”

Yesterday, about 40 persons came mostly for cleanings and extractions